Two Extremes -- One Worse Than the Other

I know that header makes no sense but I want to share two extremes of experience in the African-American community -- one, unfortunately, from my hometown of Akron Ohio and the other from the folks struggling for survival in Turkey Creek Mississippi.

First the story from the Akron Beacon Journal: 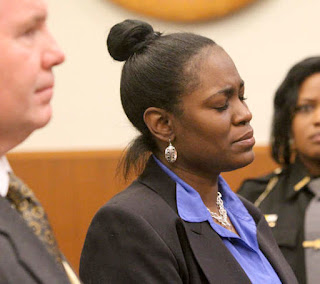 An Akron woman was sentenced to 10 days in the Summit County Jail, placed on three years of probation and ordered to perform community service after being convicted of falsifying residency records so that her two children could attend Copley-Fairlawn schools.

Summit Common Pleas Judge Patricia Cosgrove, who handed down the sentence Tuesday afternoon in a packed courtroom, ordered Kelley Williams-Bolar, 40, to begin serving the sentence immediately.
Williams-Bolar, who was standing before the bench with her lawyer, sagged into the arms of sheriff's deputies as she was led away, sobbing loudly, to begin her jail time.

After seven hours of deliberations, a jury convicted her late Saturday of two counts of tampering with records.

While her two girls were registered as living with her father in Copley Township within the Copley school district, prosecutors maintained that they actually were living with Williams-Bolar on Hartford Avenue in Akron, in subsidized housing provided by the Akron Metropolitan Housing Authority.

In addition to the tampering offenses, Williams-Bolar and her father, Edward L. Williams, 64, were charged with fourth-degree felonies of grand theft, accused of defrauding the school system of two years of educational services for the girls.

School officials testified that those services were worth about $30,500 in tuition.

The jury failed to reach unanimous verdicts on those charges, and Cosgrove declared a mistrial.
A decision on whether to re-try the grand theft charges against Williams-Bolar and her father is pending, prosecutors said.

On the tampering conviction, Cosgrove gave Williams-Bolar the maximum prison sentence — five years — for each of the two charges, with the sentences to run concurrently.
The judge then suspended all but 10 days of the sentence, which will be served in the county jail. Cosgrove also ordered Williams-Bolar to perform 80 hours of community service in mentoring programs sponsored by her church or the NAACP.

Yes, sentenced to serve her people because obviously this woman is a hardened criminal who doesn't know the value of an education. Read on ...

Williams-Bolar, a single mother, works as a teaching assistant with children with special needs at Buchtel High School. At the trial, she testified that she wanted to become a teacher and is a senior at the University of Akron, only a few credit hours short of a teaching degree.
That won't happen now, Cosgrove said.

''Because of the felony conviction, you will not be allowed to get your teaching degree under Ohio law as it stands today,'' the judge said. ''The court's taking into consideration that is also a punishment that you will have to serve.''
...
The Rev. Lorenzo Glenn of Macedonia Baptist Church also pleaded for leniency, saying his church has a mentoring program well suited for probation in lieu of prison time.

Glenn told the judge that he has known Williams-Bolar for more than 20 years and was overwhelmed by her convictions.

''This is a serious matter, but by all means,'' Glenn said, ''it was done to help her children.''

Glenn noted the attention the case has drawn and the resources used to prosecute the case.
All of Cleveland's major television stations had cameras at the sentencing.

''When I see all the media here today, you'd think it was a serial killing,'' Glenn said.

Cosgrove said some incarceration was appropriate, ''so that others who think they might defraud the school system perhaps will think twice.''

Assistant county prosecutor Terri Burnside, one of the two government lawyers assigned to the case, did not object to probation for Williams-Bolar.

After the sentencing, Brian Poe, Copley-Fairlawn school superintendent, said the prosecution of Williams-Bolar and her father ''obviously is a very difficult and uncomfortable case.''

According to court testimony, there were 30 to 40 similar residency cases involving other families from August 2006 to June 2008, when Williams-Bolar's children were enrolled in Copley schools.

Williams-Bolar was the only parent prosecuted, according to testimony...

Check out this link (I can't get the clip to post to my blog)
Posted by Rebecca O. Johnson at 5:33 PM

I welcome comments on any topic covered in Urban Ecology. I may not respond immediately but I do read them all.

Rebecca O. Johnson
Rebecca O. Johnson is a writer and activist living in Akron, Ohio. Her work has appeared in Obit Magazine, Callaloo, Race-Talk, The Women’s Review of Books and is anthologized inThe Arts of Contemplative Care: Pioneering Voices in Buddhist Chaplaincy and Pastoral Work, City Wilds and Submerged: Tales from the Basin. Rebecca works with environmental justice groups in the South and teaches at Sarah Lawrence College.

Check Out My Literary Endeavors

Toxic America: People of Mossville 'are like an experiment.' http://www.cnn.com/2010/HEALTH/02/26/toxic.town.mossville.epa/ Massive Chemical Plant Is Poised to Wipe This Louisiana Town Off the Map Closing Costs: As a chemical plant expands, a Louisiana town vanishes